The Methodist Chapels of Stokesley

John Wesley preached at Stokesley no less than twelve times between April 1752 and his final visit in June 1790, when he was 87. The entries about the town in his journal are quite brief with the exception of his first occasion, when he obviously took some satisfaction in outwitting a mob which threatened to break up his meeting. He does, however, help to establish the first meeting house which was built in about 1765. He was here in 1764 without mentioning it, but on his visit in July 1766 he refers to preaching “in the new house at Stokesley: but it would by no means contain the congregation.”

This first chapel, on Beck Side, was on the site of what was once the warehouse behind what is now the West Green Deli and Coffee Shop. It was later used as a warping house when the linen industry was an important part of the Stokesley scene before being demolished and replaced by the present building.

By 1812 the society’s membership had risen to 77 and had outgrown its accommodation at Beck Side. In May of that year a site for a new chapel was purchased for £160. This was on Back Lane (North Road) at the end of what is now Brewery Yard. The chapel was completed about a year later at a cost of £1322, including the minister’s house which still stands as the last house at the end of Brewery Yard. 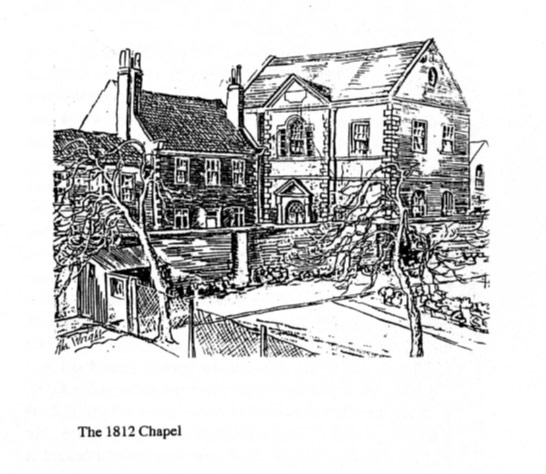 It appears that building work was carried out on a direct labour basis, rather than a total contract and some of the material purchases make interesting reading:

The cost of the project was well beyond the means of the members and, as was quite usual at the time, the major part was financed by loans. These were a constant source of worry to the Trustees and to successive Ministers over many years, particularly as there was no prospect of repaying them from normal income, quite a proportion of which was taken up in interest charges on the loans themselves. Even by 1840 little progress had been made and in the following year the society suffered a severe blow with the bankruptcy of Thomas Mease. He had been a prominent member and only a short time previously has donated an organ to the chapel. But, and more importantly, the closing of his linen mill (now Armstrong Richardson’s Mill) caused severe unemployment and hardship in the town and led to a number of families moving elsewhere.

However, by 1860 and no doubt to the great relief of all concerned all loans on the chapel had been liquidated. This was in no small measure due to the generosity of William Mewburn of Willow Hall, Halifax. He was born in Stokesley and started his working life in a local solicitor’s office before moving to Halifax where, some years later, he became a very successful stockbroker.

At about this time William Mewburn confided to a friend that he would not be satisfied until Stokesley was provided with a really god chapel, but the difficulty was finding a suitable site. The position of the 1813 chapel was far from ideal, access being either from Back Lane, a narrow unsurfaced lane, or from Chapel yard (now Brewery Yard) which at that time was not the most pleasant of localities. In 1883 patience was rewarded when unexpectedly the Black Swan Inn, the leading coaching inn in the town and with a frontage on the High Street, became available and William Mewburn arranged for its purchase without his name or purpose being disclosed. Whilst he was prepared to provide most of the money for a new chapel, school and manse, he promised to do so only on condition that the Trustees gave an absolute guarantee to raise the rest. The lessons regarding finance for the previous chapel had been well learned and there was to be no risk of continuing debt.

Agreement having been reached on these matters in August 1885, when proposed plans were also considered, things moved pretty quickly. Tenders were invited almost immediately and by November the contract had been awarded from a list of twenty-three quotations with the requirement that work should start at once. On 27th May 1886 it was possible to hold the memorial stone laying by William Mewburn and others; quite an event in the town, the school being given a half day holiday to attend the ceremony.

Such good progress was made that at one stage an opening date in October was being considered. This proved rather optimistic, but even so the date 6th January 1887 which was finally chosen was a tremendous achievement, allowing as it did only thirteen months for the demolition of the Black Swan and the building and fitting out of the chapel and schoolroom. What progress had been made on the manse as well, by this date, is not known.

The total cost of the whole scheme was £5,110 and, true to their word, in February 1888 the Trustees were able to publish a statement showing that every penny had been raised. William Mewburn had provided £3,040 and other gifts were received from far and wide, including some from overseas and even, according to the subscription list, £3.3.0. from “Dear Herbert in Heaven”!

Included in the income was £370 for the old chapel which later became a brewery – hence the change from Chapel Yard to Brewery Yard. The building was eventually demolished in 1972.

A major fund-raising event was a “Grand Swiss Bazaar and Fancy Fair” mounted in the Town Hall under the patronage of a formidable list of dignitaries, including Sir Joseph and Lady Pease of Hutton Hall (the openers), William Mewburn, J.C. Sowerby, J. Emerson of Easby Hall, E.H. Wynne Finch of Stokesley Manor, Dr. Handyside (whose house was until recently occupied by the Bishop of Whitby) and various JP’s and MP’s. There were a number of entertainments each evening and the hall represented a Swiss village with cottages and chalets, the ground floors of which were stalls manned by local ladies. The whole thing was designed by a gentleman describing himself as scenic artist to H.R.H. the Prince of Wales, whatever that entailed. It warranted the running of a special train from Hartlepool and Stockton so it obviously attracted a good deal of interest!

The chapel is essentially the same as when it was built but, of course, some improvements have been made over the years. The first of these was the installation of the present organ in 1896. This was built by Harrison and Harrison of Durham and is still maintained by the same firm. The cost of £350 was immediately covered by subscriptions. The organ was originally hand-blown (Tom Richardson spent many Sundays as a boy pumping the bellows!) but an electric motor was installed many years later. Similarly, the original gas lighting was converted to electricity, and oil superseded coke for heating. In the rear premises a kitchen and toilets were added to the main and primary schoolrooms and the pulpit originally provided for the Sunday School Superintendent was removed.

Very recently, and as part of the centenary celebrations, the sanctuary area in the church itself has been opened up by substituting a smaller portable pulpit for the large original structure, from which it was made, and by extending the communion platform to the full width of the church.

The manse is little altered, other than the improvements one would expect in the provision of water, electricity and heating. It is interesting to note that the Guardians of the Poor of the Stokesley Union, the unlikely sanitary authority for the district, certified in 1887 that the manse had “a supply of wholesome water from a well under a pump”. These were in the outhouse, where the well has been made safe and the pump is now displayed on the garden wall.

The Primitive Methodist Connexion was created in 1812 and no doubt there were members in Stokesley from an early date. They would initially meet as a house group but in 1835 they built their first chapel in Back Lane at a cost of £264. This is the building which is now used by the Elim Mission. As with the 1813 Wesleyan Chapel, most of the money was borrowed and it was 1875 before the society was clear of debt.

The chapel had seating for 200 so that one assumes it had a balcony. Later, however, the lower part of the building was converted to a dwelling house which, from 1862, was occupied by the minister. Gas lighting was installed in 1849 for the princely sum of £6.17.4 and half-yearly gas bills were in the region of 5/- to 7/-.

They too had access problems and were bitterly disappointed that Mr Sowerby would not sell them a strip of land to provide a pathway through to the High Street.

By 1903 it was decided that better premises were needed and a site on High Green (College Square) was acquired for £40. The new chapel was built for a total cost of £832. At the same time, the Circuit provided a new manse on Springfield for the minister, the various chapels in the Circuit being told what their contributions should be!

A new organ, built by Nelsons of Durham, was installed in the chapel in September 1915 for £265 and when the chapel was closed (it is now the N.F.U. Building) the organ was transferred to Swainby Chapel.

The day arrived in 1941 when the High Street and College Square Circuits amalgamated and Methodist worship in the town was centred on the Stokesley Methodist Church in the High Street. The Harvest Festival and Thanksgiving Meeting held in October of that year included for the first time an appeal as a United Circuit.