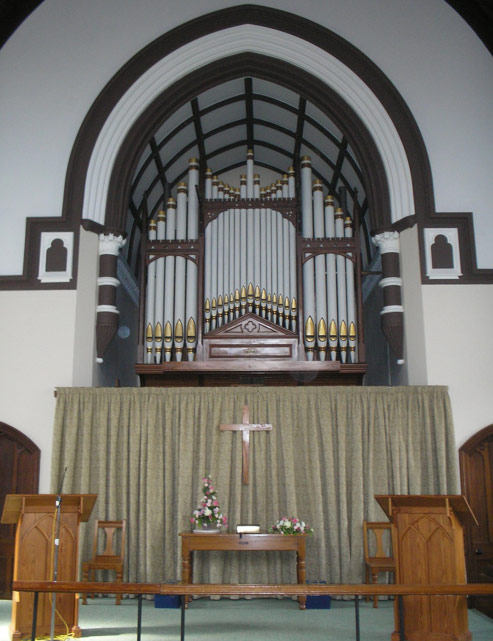 Built by Harrison & Harrison of Durham, our Organ was ordered in August 1895 and installed the following year at a cost of £350. On June 21st 1896, Dr Jones formally opened the organ when Mr Owen from Hartlepool preached. He was a critical musician and spoke highly of the instrument.

A Mr Hurd of Yarm was also consulted on March 5th 1896 and noted “that you will have seen that the Philharmonic Society have adopted the French pitch which is lower than the English. Can the Chapel organ be adapted to the French pitch with inconvenience, if so I should very much prefer it. There is hardly a singer who can reach G in alto, and therefore many anthems are out of question and we are aspiring anthems even in a Wesleyan Chapel.”

It is a two manual fifty eight note mechanical action with a thirty note radiating pedal board.

There are six speaking stops on the Great Organ, lower keyboard – Fifteenth, Principal, Harmonic Flute, Dulciana and Open Diapason. There are two Pedal Board stops, Open Diapason and Boardon, and three couplers.

The Trumpet on the Great Organ was put in in 1908 but this eventually made good tuning difficult and was removed in 1989.

In all there are seven hundred and fifty four manual pipes made of metal, and sixty wooden pipes for the pedals ranging in size from nine inches pencil thin to sixteen feet by eighteen inches square. 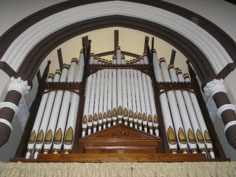 The makers tuned it regularly until 1919 and then it was apparently neglected until 1927. Harrisons again took over the tuning until 1932 but this arrangement ceased until a major overhaul was undertaken in 1958 at a cost of £442.10.0.

Harrisons inspected the organ in May 1957 and reported that “The organ is very fair owing to the good quality of workmanship put into it originally, and it is capable of being turned into a first-class organ again. There are, however, some very serious faults in the Great and Swell soundboards and these are running badly; also the mechanical actions of these departments is worn out, the leather connections are perished and the wooden trackers have been dazed through age. The reservoir is still in good order; the pipework generally is good but a great improvement could be affected with the addition of tin tuning slides; these should be fitted to all cylindrical stops to prevent damage to the pipework which can be caused by the old-fashioned method of tuning cones. There is the usual accumulation of dirt and natural wear and tear throughout of the other mechanisms.”

An estimate of cost of £442.10.0 for the repairs was accepted by the Trustees.

The next overhaul was in 1989 at a cost of £10,077.45 when the organ was cleaned and overhauled, manual keys refaced in ivorthene, the drawstop knobs were re-engaged, new springs and felts to the pedalboard were fitted, the Swell pedal was refaced, the pedal jack was overhauled, pedal actions were re-leathered and the leather lozenges were renewed.

Some parts of the organ were taken to the Harrison workshops in central Durham and the pipes were stored in the Gallery prior to refitting and tuning.

Harrison and Harrison continue to tune the organ on a regular basis.

During major alterations to the Church and, in particular, the recent enlargement of the Entrance Porch which was part of the Mustard Seed Project 2013, the organ was entirely covered in plastic sheeting and on its reinstatement the Harrisons tuner found the instrument to be in excellent shape.

The organ continues to be a popular attraction to visiting orchestras and Music Societies.